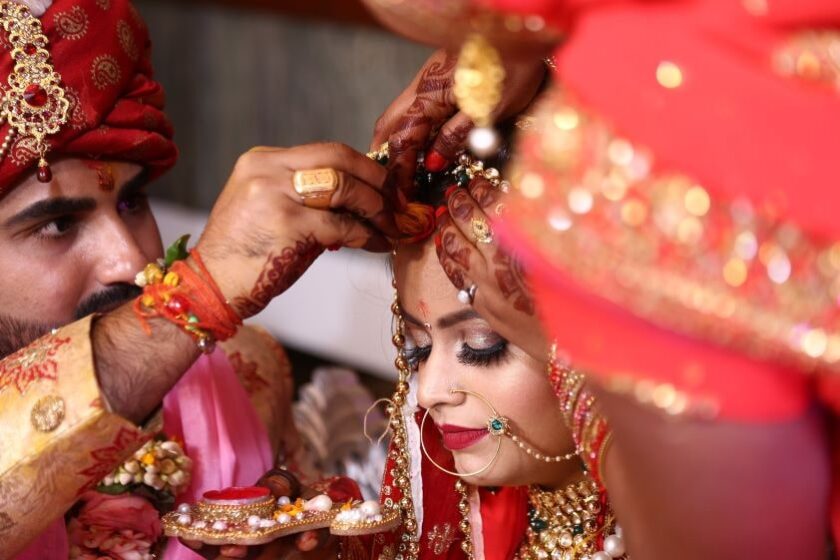 The 7 strangest wedding traditions in the world

If you thought avoiding the bride in her ceremonial dress before the big day was weird, wait until you hear some of these wedding traditions observed by different peoples around the world.

In many cultures, weddings are much more than beautiful clothes and delicious food: they involve the fundamental traditions for the ceremony and the future happiness of the couple.

In Scotland, the night before their wedding, the bride and groom are captured by their friends, tied up and “blackened”, ie covered in soot, custard, molasses and flour before being paraded around town. It goes without saying that the premarital tradition involves a fair amount of alcohol.

While it may not seem like exactly the dream preparation for your wedding, there is a reason behind this insanity. According to Scottish tradition, blackening should ward off ills before the couple gets married.

According to The Scotsman, the tradition continues today in the Orkney Islands, Aberdeenshire, Angus and Fife, and is experiencing a revival across the country.

The kidnapping of the bride, Romania

Something that would get you arrested in many countries is common practice in Romania. The invited to the wedding kidnap the bride from her wedding ceremony and held hostage in a room near or in a hotel room.

Hence, the groom must barter for his return, either for bottles of wine or a public declaration of love. In a world where weddings are largely predictable events, a little faux kidnapping sure adds a bit of drama and excitement.

The theft of shoes, India

Some wedding traditions are quite playful. In Indian marriage, for example, the groom finds himself barefoot and has to win back his shoes. On her wedding night, when she enters the room where the ceremony will take place, she takes off her shoes at the door and the women of the bride’s family steal them and take them away.

The groom’s family is then tasked with finding the hidden shoes. If they cannot be found, the groom must exchange them for money, sweets or other gifts, as he is not allowed to leave without his shoes.

Shoe theft is meant to symbolize the merging of the two families and shows how ready they are to share a life of laughter and fun together. If you are planning to marry a German in his / her territory, do not waste too much time choosing porcelain models.

In a common ritual called Polterabend, guests gather in front of the bride and groom’s home the night before the wedding and destroy plates, pots, and other fragile items.

When everything is broken properly, the event often turns into a small informal party. Destroyed dishes should bring luck to the happy couple.

Ban on using the toilet, Indonesia

Most married couples look forward to their honeymoon for months (and sometimes their wedding night for years), but for the people of the Indonesian tribe of Tidong it’s a little more complicated than flying away afterwards the party for some romantic alone time.

For three days and nights after the wedding, many honeymooners are forced to stay indoors, guarded by friends and family, and are unable to use the bathroom. To make this only remotely possible, they are given a minimal amount of food and drink.

According to tradition, resisting these restrictions will lead to a happy marriage with healthy children, while failure of the trial will lead to bad luck, infidelity or the premature death of future children.

For the Chinese people of Tujia, starting a full month before the wedding, the bride cries for an hour every day. Ten days later, his mother joins and the grandmother 10 days later. By the end of the month, every woman in the family is part of this crying festival.

The ritual is not, however, a spectacle of sadness. Common crying is meant to be a show of solidarity and an expression of joy as the bride prepares to start her new life. The bride’s inability to shed tears is considered a sign of poor education and could lead to harsh judgment of her community.

Shooting arrows at the bride, China

Some women dream of being pierced by Cupid’s arrow, but this is probably not what they had in mind.

This tradition of the Chinese Yugar people requires a groom to shoot three arrows at his bride – no, they have no real points, and there is no need to have the emergency numbers on hand. Afterwards, the groom breaks the bow in half, collects the fallen arrows and breaks those too.

According to custom, this ensures eternal love.